What if manipulating human gut bacteria — our microbiota —  could treat high blood pressure, the No. 1 risk factor for the top two health-related killers: heart disease and stroke? What if understanding how warming soils in the Alaskan Arctic could tell us if faster decomposition and plant growth there contribute to or offset the greenhouse effect? How can shape memory alloys be engineered for devices that treat disease and used for other applications?

University of Toledo researchers Dr.Bina Joe, Dr. Mohammad Elahinia and Dr. Mike Weintraub are investigating these questions and others to break new ground in their respective research fields. With commitment and passion, these three scientists are leveraging new collaborative research opportunities, building interdisciplinary teams and attracting federal funding in support of their projects. They are but three of many UToledo faculty members who are experimenting, testing and contributing new technologies, therapies, scholarship and creativity to improve the human condition.

This month, we focus on the research of Dr. Mike Weintraub, professor of soil ecology. Next month, this publication will feature Dr. Bina Joe’s work on hypertension, and in March, Dr. Mohammad Elahinia’s research on shape memory alloys will be featured. 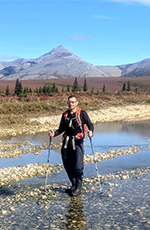 In the Alaskan Arctic, Dr. Mike Weintraub, professor of soil ecology, traverses the terrain to study plant growth and decomposition as it relates to warming conditions in one of the coldest of places in North America.

“Soils that we ignored as being too cold and frozen to be important, turned out to be active and we need to better understand what is happening at low temperatures,” says Weintraub. “We’re seeing carbon dioxide (CO2) released by decomposers coming out of soils even below freezing. As winters get warmer in the Arctic, decomposers are becoming more active, and it’s increasingly important to understand what’s happening to warming soils.” 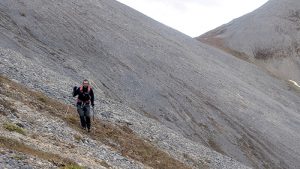 Dr. Mike Weintraub traverses some hilly terrain in Alaska during a research trip in August 2018.

Through his research, Weintraub looks at the cycling of CO2 through plant growth, which takes up CO2, and decomposition, which releases it, and how these relate to warming trends in the Arctic. “Dead plant material has been accumulating in this landscape since time immemorial, and with warming, decomposition is starting to speed up. The problem is all this dead plant material is full of carbon that gets turned into CO2 when it decomposes,” explains Weintraub.

A concern, Weintraub notes, is the potential for a feedback loop: the human-released CO2 in the atmosphere causes warming, and warming then accelerates decomposition of dead plant material. Then the carbon in this material turns into more CO2, which then accelerates warming and speeds up decomposition even more. “There is two- to three-times as much carbon sitting around Northern ecosystems as dead plant material as there is CO2 in the atmosphere. That’s a lot,” says Weintraub. “That could make matters worse if a significant amount of material decomposes and turns into CO2. But this CO2 could be taken up if warming also increases plant growth. 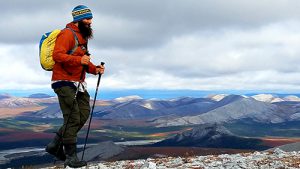 “In many ways, the carbon balance of a warmer Arctic hinges on the balance between decomposition and plant growth. Because increased plant growth will require nutrients, essentially, the fulcrum of that balance is nutrient availability,” says Weintraub. “If we want to predict the carbon balance of the Arctic under different possible future climate scenarios, we need to be able to predict those future decomposition- and plant-growth rates.”

Weintraub has been studying these processes since 1996 at the country’s premier Arctic research facility, Toolik Field Station in northeastern Alaska. More recently, he has been working in a remote area in the Noatak National Preserve in the northwest area of the state. There, he is studying what controls the rapid, northward advance of spruce trees. This, he says, can change the landscape in ways that interact with the carbon balance of the ecosystem. Trees store tons of carbon but also trap blowing snow, which acts as insulation and warms the soil. This potentially increases decomposition rates in winter and cools the soil in summer by increasing shade and possibly decreasing decomposition rates. 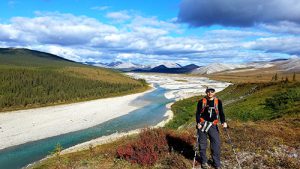 Dr. Mike Weintraub traveled to Alaska in the summer of 2018 for his ongoing research studying soil temperature.

“There are complicated changes to these ecosystems that involve a lot of different moving parts all at the same time,” he says, and the human brain can’t track how all of them might change in relationship to each other under different scenarios. Weintraub seeks a basic understanding of these processes to develop predictive, mathematical models that can track the interactive parts.

“For eons, Arctic plants have grown faster under the summer midnight sun than they can decompose in cold soils, making the Arctic a carbon sink,” says Weintraub, but new evidence shows the Arctic is starting to shift to a carbon source. “As a carbon source, dead plant material turns into CO2 faster than plants take it up, and the atmosphere absorbs the excess. Once CO2 gets up into the atmosphere, the atmosphere doesn’t pay any attention to whether it came from people or the soil, it all just contributes to the greenhouse effect.”

Weintraub has brought more than $1.5 million in external funding to UToledo for his Arctic research. He also studies soil nutrients closer to home and is in the development stages of a new project studying soil phosphorus runoff and sediment phosphorus release into Lake Erie. The Department of Energy could potentially provide funding for this project, which is spurring other ideas and collaborations. “We’re working on building a portfolio of other proposals around it,” he says.

Weintraub and Tom Bridgeman, professor of ecology and director of the University’s Lake Erie Center, and a collaborator at Lawrence Berkeley National Lab, will submit a proposal early this year to study “phosphorus release from sediments in coastal wetlands and offshore in Lake Erie.”