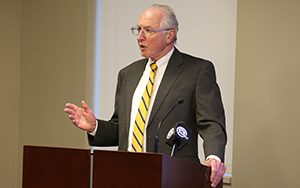 Frank Calzonetti, vice president of research at The University of Toledo.

The University’s total award dollars are up by more than $4 million when comparing the first quarters of 2018 and 2019. “This year (2019) we’ve had some big award dollars. Our first quarter is typically the biggest quarter of getting research awards,” says Calzonetti. “We really can’t predict what the total will be at the end of the year. But I’m confident that we’ll see an increase,” he adds. The University received $46.4 million in total awards during FY2019.

The National Science Foundation provides broad support for research across the physical sciences, social sciences and engineering, as well as supporting STEM education, technology advancement and technology commercialization. The National Institutes of Health is the nation’s premier agency supporting medically related research. These two agencies account for most of the university’s sponsored awards.

If the federal budget decreases, “it gets more competitive and more challenging for us,” Calzonetti says. UToledo relies on federal funding for large investments, such as outfitting a laboratory with high-end microscopes or computer facilities, for example.

Obtaining large award dollars also benefits UToledo students. “They get access to state-of-the-art instrumentation, and that gives them an edge and makes them so much more competitive in their industries,” adds Calzonetti.

“Basic research that our faculty members are involved in is creating new discoveries that could have implications across a wide range of areas but is not necessarily directed to solve a specific problem,” Calzonetti says. However, most of UToledo’s fundamental research is directed toward certain applications. For example, University researchers are working on finding ways to improve the efficiency of solar cells, focusing on how they interact with the elements to withstand harsh environments and have a long performance life.

Solar energy is among the areas of research excellence, as are water quality, astrophysics and cell architecture, which spans the biological sciences, chemistry, medicine and pharmacy. An interdisciplinary Water Task Force continues its work on water quality, which also looks at the impact on human health linked to the microcystins in the toxic algal blooms in Lake Erie.

In October 2019, the University hosted a National Lab Day, in which directors and lead scientists from the country’s national labs came to UToledo to discuss research projects and potential partnerships with UToledo scientists and engineers. The benefits of that day included opportunities for University researchers to gain access to instrumentation and collaborations, and it helped raise UToledo’s reputation, says Calzonetti.

In addition to areas of research excellence, the University has identified areas of unique distinction, including hypertension and precision medicine, human trafficking and disability studies. Many emerging areas of excellence and future opportunities also are part of the strategic plan to invest in research.

Across the institution, committed faculty members are raising the profile of their fields of study such as in the arts and humanities, and the University is supporting their efforts to help reach an institutional goal of becoming one of the top public research universities in the country.