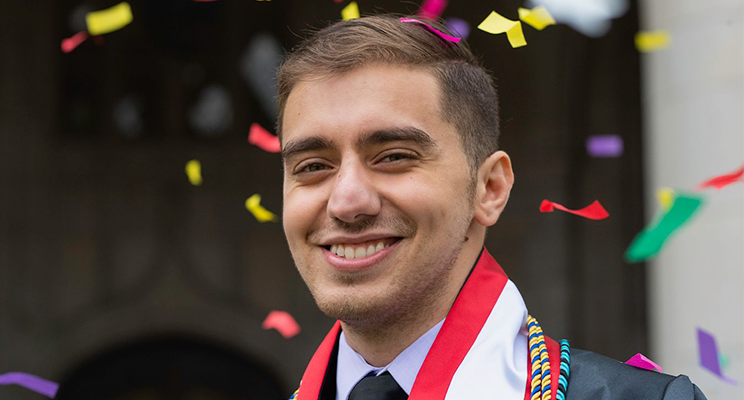 Recent alumnus Loay Alarab ’21 found his home away from home at The University of Toledo, 6,000 miles from his childhood stomping grounds of Beirut, Lebanon.

A Start in Toledo

Alarab first traveled to Toledo when he was 15 as an exchange student. He attended Start High School and built a solid foundation with the help of his host family, comprised of two UToledo College of Law graduates. During his high school experience, he decided to take a tour of campus. 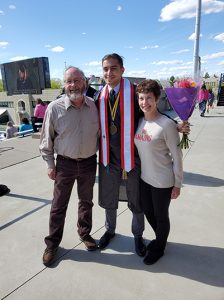 Loay on graduation day alongside his host family

Like many of his fellow alumni, Loay immediately fell in love with the architectural design of University Hall. “With the valuable experience I had as an exchange student, the presence of an amazing family nearby and scholarship opportunities, committing to UToledo was a no-brainer,” Loay noted.

During his freshman year, Loay co-founded the student organization, Middle Eastern and North African Association (MENAA). MENAA is a cultural organization that aims to teach UToledo and the community about the different heritages and traditions of the Greater Middle East and North Africa region. Establishing MENAA was one of his proudest accomplishments during his college career. He explains, “Founding a space for people from my community to get together, talk, share our culture and watch friendships develop was an incredibly rewarding experience that made me cherish UToledo a lot more.”

The Outstanding Student in Political Science Award recipient, however, did not begin his collegiate career pursuing political science. His first interests were management, entrepreneurship or cuisine. After attending some UToledo tailgates with his host family, Loay took up an interest in law.

When asked how he chose political science, Loay simply stated, “I think just with coming of age, I came to the understanding that studying politics could be a very useful tool to supplement the work already done by my community [in Lebanon] in their struggle towards freedom and liberation.”

He added, “After taking various classes from different departments in my first two years, it was one class, Sexual Politics by Dr. Renee Heberle, that really cemented my interest and passion for learning more about political theory and sexual politics. I realized then that I have picked the right major, and that I would continue learning and researching within it.”

Picking the right major would soon become an understatement for Loay, as he quickly became a driving force in the political science program. With the help of Dr. Saatvika Rai, Dr. Renée Heberle and Dr. Jetsabe Cáceres, Loay pursued various research opportunities which resulted in several research grants. Loay presented “The Strive for Democracy in the Arab World: The Aftermath of the Arab Spring” at the Midwest Political Science Association Conference, the second-largest political science conference in the U.S., in 2019. He was unable to present his “Sexual Politics and Queer Theory Under the Lens of Orientalism” project in 2020 due to the COVID-19 pandemic.

His inspiration for gender and queer theory research stemmed from queer theory not being sufficiently addressed in some of our current global social realities. “I particularly focus on queer communities and queer knowledge that comes from the Arab world,” comments Loay. “I believe that understanding how these communities have developed their own ways of resistance, community building, solidarity networks and intrusion into the political space can be extremely valuable in helping us learn about what kind of societies allow for the liberation of peoples on the peripheries.”

This fall, Loay will enter the University of Michigan Ph.D. program in political science, one of the top five programs of its kind in the U.S., with full funding.