Seizing Opportunities Leads to a Career in the Courts, Family of Rockets 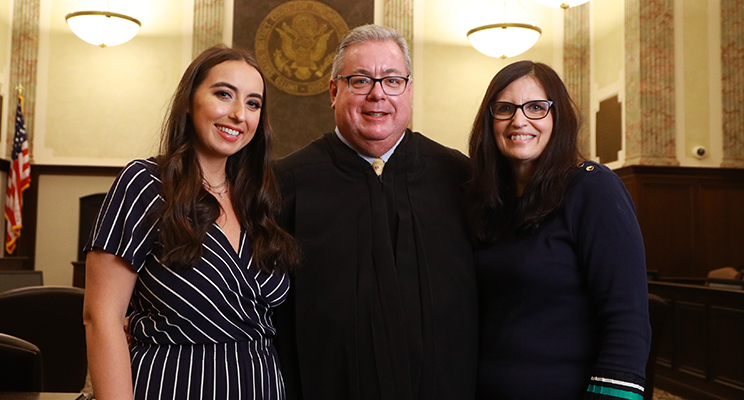 James Knepp ’92 was sworn in as a United States District Judge for the Northern District of Ohio on Nov. 19, 2020, after serving 10 years as a U.S. magistrate judge. He loved serving as a magistrate judge and has discovered that being a judge is what he was supposed to do.

He spoke recently with the College of Law about his experiences and family connections to the University.

What was the first thing you did after you were officially confirmed?

I received a call from Senator Portman from the Senate floor congratulating me and telling me that I had enough votes for confirmation (I was watching on C-SPAN 2, but there is no running tally of votes on the screen). Then I called Linda to tell her the news.

What is the most challenging aspect of your role as a judge?

Sometimes there isn’t a clear answer, but you still have to make a decision. I once heard a wise judge explain that “Being a good judge means having enough confidence to make a decision—and enough humility to know that you might be wrong.”

How did you find your way to Toledo Law?

I grew up dreaming of being on the radio and went to college in pursuit of that. I took a business law class taught by an adjunct professor who was a lawyer (and then judge) in Alliance, Ohio, named Robert Lavery. He taught the class as if we were in law school, using a casebook as the text, employing Socratic method lectures, and providing Green Books for the final exam essays. On the cover of my final exam, Lavery wrote, “Knepp, stop BS-ing yourself playing radio guy — you need to go to law school.”

After pursuing a graduate degree in mass communication and working at multiple radio and TV stations and at a recording studio, I finally decided that maybe Professor Lavery was right. I took the LSAT, did pretty well, and settled upon attending law school in Columbus for the fall of 1989, mostly because of the football team at that school. After making that decision, my brother got hired as a graduate assistant football coach at The University of Toledo in the spring of 1989. He was coming out to campus for some meetings with the coaching staff, and I tagged along.

Even though I had chosen another school, I had never actually set foot in a law school and thought it might be fun to take a tour. I wandered over to the law school and asked the person in the admissions office if I might be able to get a tour.

Instead of a tour, the next thing I knew, I was up in the administration suite sitting next to then Associate Dean Phil Closius, who, in so many words, told me I would be crazy not to come to Toledo. He admitted me on the spot and awarded me a scholarship. So, what turns out to have been one of the best and most important decisions of my life, started out as a way just to pass a couple of hours. To make the chain of coincidences even more profound, I didn’t know it then, but Robert Lavery was a 1976 graduate of Toledo Law. In hindsight, I just have to believe it was all meant to be. 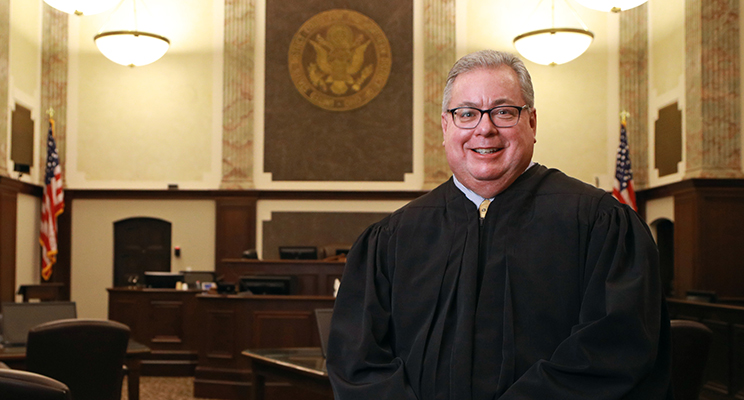 What brought your wife to UToledo for law school?

Linda grew up in Detroit and graduated from Wayne State University. When she decided to consider law school, she was invited to an open house at Toledo Law. As part of that experience, she sat in a demonstration law class and thought the professor was absolutely amazing. Linda liked everything about the experience, and decided Toledo Law would be a good fit.

Did your and Linda’s experiences at UToledo play a role in your daughter Sarah choosing to become a Rocket?

Linda and I met in law school, and most of our professional friends and colleagues attended Toledo Law. And we’ve both had rewarding careers in a truly special legal community. Sarah has certainly seen that, as well as the lifelong relationships we have maintained with some of our classmates and our general affection for the college.

What does it mean to know you’ll have three Rocket graduates in your immediate family?

Linda and I look back fondly on our experience at Toledo Law. While we were apprehensive about Sarah being a first-year law student during a pandemic, we were happy to see her develop a network of friends to study and socialize with. We are probably both living vicariously a bit through her, remembering our own experiences in law school. We love being ambassadors for UToledo, and what better testimonial can we give than sending our daughter there!