While it may not be Six Degrees of Kevin Bacon, the city of Toledo does have connections to some notable names, historically speaking.

Mark Twain and Harry Houdini, Frederick Douglass and Susan B. Anthony, Ty Cobb and Babe Ruth, Dr. Martin Luther King, Jr. and Mother Theresa — each of these prominent cultural figures has graced Toledo for publicity, politics or personal reasons since the city was founded in 1833.

Surprised? So was local history enthusiast and storyteller Tedd Long.

Long, 59, a chief operating officer for a local consulting firm, chronicled the Toledo-area trips of more than two dozen famous and important guests in “Forgotten Visitors: Northwest Ohio’s Notable Guests,” which was recently published by The University of Toledo Press. 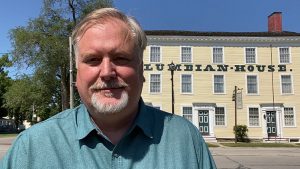 A Mansfield, Ohio, native who moved to Toledo from Chicago more than 30 years ago with his young family, Long fell in love with northwest Ohio and its rich history. While sharing that history during annual tours he led for Leadership Toledo, he realized he knew far more about his adopted hometown than those who were born and raised here.

“I would watch people’s mouths drop when I would tell them stories,” Long said.

Then he realized the stories from Toledo’s past he shared that got the most attention involved the famous and the infamous. Name-dropping, he discovered, was a gateway to piquing interest in local history.

“It’s a much more interesting way to engage someone in the history of Toledo through these stories and these visitors than if I sat there and rattled off dates and visitors’ names,” Long said. “It’s people’s stories that really engage you and drag you in.”

In fact, it was the Old West heroes Wyatt Earp and Bat Masterson and their connection to Toledo that first enthralled Long.

For the much-ballyhooed fight between heavyweight boxers Jess Willard and Jack Dempsey on  July 4, 1919, in Toledo, long-retired lawman Masterson was in town to cover the fight for the New York Morning Telegraph and was hired to handle security, a job that would include collecting weapons from the likes of Al Capone and other mobsters. To help him, Masteron recruited his friend Earp, who was also retired from law enforcement.

“That blew me away,” Long said. “Imagine climbing into the ring and seeing Wyatt Earp and Bat Masterson taking guns and knives from these tough guys.”

Yarko Kuk, managing editor of The University of Toledo Press, convinced Long to share those kinds of Toledo-centric stories in what would be his first published book. 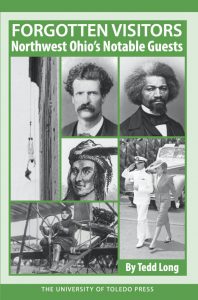 ‘Forgotten Visitors’ is one of five books The University of Toledo Press has published in the last six months.

“Tedd is an exceptional story-teller,” Kuk said. “He is enthralled with the history of our area. That is evident in his writing and research. ‘Forgotten Visitors’ is a great book with a broad appeal. It has been a strong seller and we are in discussions with Tedd for a number of other projects that show great promise.”

That collaboration came together rather easily, Long added.

“The first chapter was hard to figure out, having never done a book before, but after that it was pretty easy to wrap my arms around,” he said. “Working with Yarko and The University of Toledo Press was pretty seamless.”

As 2020 comes to an end, The University of Toledo Press will have published five books in the last six months.

“That has never happened,” Kuk said. “I think the most was three over the course of a year. COVID-19 definitely made its mark on our operations. Because of what was happening in the spring, we had to hold off on printing until the fall, and then the dam broke loose.”

Up next for Long is “100 Things to Do in Toledo Before You Die,” a book from another publisher to be released April 1, and The University of Toledo Press coffee table book, “Remarkable Spaces,” featuring photos of famous and infamous historical spots in the area with accompanying essays.