The University of Toledo is naming its College of Business and Innovation for one of the greatest mutual fund investors in modern history who got his start on the UToledo campus and generously gave back to his alma mater.

The newly named John B. and Lillian E. Neff College of Business and Innovation honors John Neff and his family for their commitment to enhancing the educational experience and competitive advantage for UToledo students. 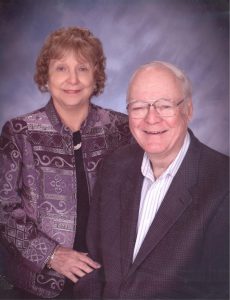 The College of Business and Innovation is named for John and Lillian Neff in honor of their commitment to enhancing the educational experience and competitive advantage for UToledo students.

“The generosity of Mr. Neff and his family has made a tremendous impact on our College of Business and Innovation by supporting some of our most promising students and attracting top faculty experts to our campus to train the investors of the future,” said UToledo Interim President Gregory Postel. “We are proud to name the college in his honor and look forward to the impact that connecting his legacy more closely to our business programs will have on generations to come.”

Neff, who died June 4, 2019, at the age of 87, received his bachelor’s degree in industrial marketing in 1955 from UToledo, where he also met his wife Lillian. She preceded him in death in 2017.

“It’s with tremendous pride that we partner with The University of Toledo in celebrating the naming of the John B. and Lillian E. Neff College of Business and Innovation,” said Lisa Neff-Ryave, their daughter. “My Dad often spoke of his genuine love for The University of Toledo and the humble appreciation he held for the education he received while there. It was that base in finance that propelled him forward in his illustrious career with Vanguard’s Windsor.”

Neff had gone to Wall Street immediately after graduating from UToledo, but didn’t get the interest he had hoped for. He instead started his career at National City Bank in Cleveland and later was offered a position in Philadelphia as manager of the Wellington Management Co.’s Windsor mutual fund, where he earned a reputation for outperforming the stock market for the next 30 years.

Neff’s approach was looking for stocks that in his words were “overlooked, misunderstood, forgotten, out of favor” and he favored steady performers and aimed to pay a low multiple of annual earnings, as described in the obituary article published in the Wall Street Journal.

The naming of the College of Business and Innovation recognizes the alumnus’ success, as well as his generosity. The $18.7 million gift to UToledo encompasses John and Lillian Neff’s lifetime and estate giving, as well as a gift from their children, Lisa and Stephen, who wanted to participate in honoring their parents in such a meaningful way.

Neff also personally shared his experience and expertise with students, mentoring them on investment strategies and methodology. He was instrumental in the design of the Student Managed Portfolio course, in which UToledo students manage an account initially funded with $1 million from The University of Toledo Foundation. The course provides students hands-on money management experience to learn the business and science of investing. 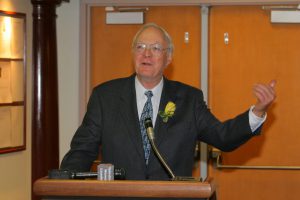 Neff received his bachelor’s degree in industrial marketing from UToledo and went on to become one of the greatest mutual fund investors in modern history.

His previous donations to the College of Business and Innovation established the Neff Trading Room equipped with high-tech Bloomberg terminals, which students use to access real-time information from the New York Stock Exchange, NASDAQ and Chicago Board of Trade. The Neff family also established an endowed chair in the college and they have funded student scholarships and faculty teaching and research awards. The Department of Finance had already been named in Neff’s honor.

“He relished those experiences, they were precious to him,” Neff-Ryave said. “UToledo was definitely his extended family and he was forever proud to be a Rocket. It is with tremendous pride that my brother Stephen and I join this effort in supporting our parent’s legacy by naming the Neff College of Business and Innovation.”

The UToledo Board of Trustees approved the naming of the college in Neff’s honor at its Dec. 14 meeting. A celebration event will be planned for a future date.

“We are proud to call this Wall Street giant a graduate of our University and our college and we are so appreciative of his generosity that has already impacted generations of students and will continue to elevate the educational experiences of business students for years to come,” said Dr. Anne Balazs, dean of the College of Business and Innovation.