In her New York studio, artist Sheree Hovsepian (A/S ’99) spends time playing a private game of trial and error. What works or doesn’t work becomes more obvious to her as she pulls out original photograms — images she’s made without a camera, or a found object, nylon fabric, paper, wood and string — some of her materials of choice to arrange, rearrange and assemble. 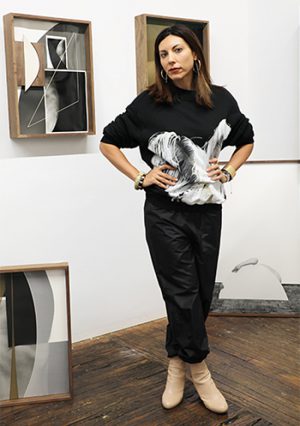 “I pull things out, I move things around; it’s very physical,” says Hovsepian, whose artworks are among the collections of New York’s Solomon R. Guggenheim Museum, The Art Institute of Chicago, The Studio Museum in Harlem and The Spertus Museum in Chicago. She describes this creative process as “trying to fit together pieces of a puzzle that actually don’t have an end.”

As an undergraduate at The University of Toledo, Hovsepian studied photography with Deborah Orloff, professor and associate chair of the Department of Art. She returned to UToledo last month to speak about the progression of her work and what it’s like to be a working artist. After a lecture, she visited with photography students, advising them to take advantage of opportunities, such as artist residencies, and on how to network in the art world to get their work viewed.

Among the women artists whom Orloff introduced to Hovsepian and her classmates were Sofie Calle, Annette Messeger and Lorna Simpson — artists who influenced Hovsepian’s ideas about art-making. “They were artists who used the materiality of the photograph. There was a strong conceptual framework around their work and a keen sense of aesthetics that I responded to,” says Hovsepian.

Her decision to study with the late Barbara DeGenevieve at The School of the Art Institute in Chicago and earn an MFA came about after DeGenevieve spoke to art students at UToledo. “She had a following of students who wanted to study with her,” says Hovsepian. “She kind of just blew my mind. I found her inspiring.”

Hovsepian was born in Iran in 1974 and immigrated with her parents to the United States when she was just 2 years old. When they moved to Toledo, Hovsepian says the absence of a Persian community to connect with created isolation for her family. “I didn’t feel enmeshed in the society,” she says, but having been so young upon her U.S. arrival, she also had little affinity with her native Iran. 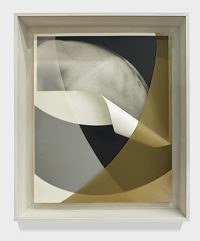 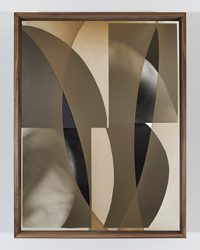 Much of the work of the female artists Hovsepian has been drawn to speaks to matters of identity, often ethnic, sexual or racial. In her personal work, approaching identity is about being present, she says. “I’m thinking about ways of locating myself within a space. This might come from me feeling I wasn’t so accepted or present growing up.”

She says the late Cuban-American artist Ana Mendieta was inspirational. Mendieta placed her body into various landscapes, leaving behind an imprint. “It’s about the idea of making a mark and leaving a trace,” says Hovsepian.

Hovsepian often photographs her sister to represent herself in many of her pieces. The artist is visible in the positive and negative spaces of the works, sometimes as a curved spine, a rib cage or the female figure stretching nylon fabric in which she’s encased. In the pieces that Hovsepian is most-known for, these body images appear among layers of stretched nylon and rolled paper, giving the works depth and definition while leaving a personal impression. 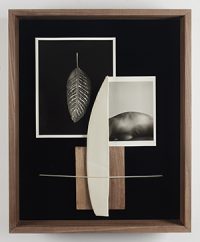 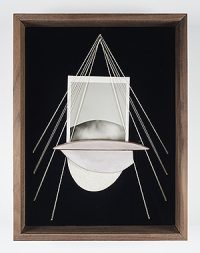 The assemblages she creates characterize the material approach Hovsepian has developed over time. “I think of mark-making as an additive process. You start with a blank sheet and you’re constructing things to go on it.”

One of her photographic works, called “Sleight of Hand,” challenges Henri Cartier Bresson’s concept of “the decisive moment.”

Cartier Bresson, a 20th-century photojournalist, described that moment to the Washington Post in 1957. “There is a creative fraction of a second when you are taking a picture. Your eye must see a composition or an expression that life itself offers you, and you must know with intuition when to click the camera. That is the moment the photographer is creative,” he said. 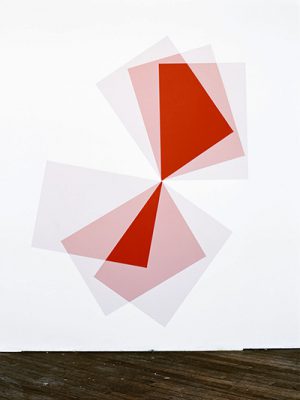 For “Sleight of Hand,” which consists of multiple exposures, Hovsepian explains: “I figured out what a proper exposure would be, but then I would divide it by, say, three, and then move the paper in each third, so the final negative would have these varying degrees of color.

“Sleight of Hand” “upends” the idea of the decisive moment “because this was many moments created in an additive process,” Hovsepian says.

As she continues to open new shows in New York and Chicago galleries, and elsewhere, it is clear that Hovsepian’s moment for exposure in the art world has come, and she is making her mark.