When Usman Cheema (HSHS ’09, MED ’15) first came to the Toledo area, he had no idea what a physician assistant was or did. He came here from his native Pakistan with an associate’s degree in accounting, but caring for others was always a priority for him and his family members. 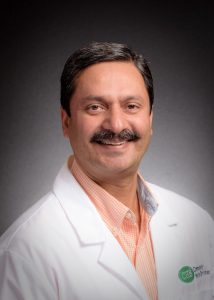 Cheema would visit his oldest brother, who arrived in Toledo in 1974, and who cared for their father who had cancer. In 1994, Cheema’s father passed away, and in 1999, Cheema and his wife permanently moved from Pakistan. For a time, Cheema took care of his mother, and when he and his wife were working or traveling, his oldest son Tayyab looked after his grandmother. Currently, his other brother, who is mentally challenged, and his mother-in-law live with his family in Perrysburg.

Caregiving is in his nature and is now his career. Cheema cares for patients, working as a physician assistant at Community Health Services in Fremont, Ohio. He loves his job and particularly likes the community aspect of his work. Before he landed this role, his career took a few twists and turns, and he earned a couple more academic degrees along the way.

After first arriving in Ohio, Cheema worked in accounting. He enrolled in a couple of semesters at Owens Community College, but decided then that this field was not for him. “I realized I did not like that because I’m a people person. I like to move around, talk with people. I didn’t like being behind a computer.”

He learned that nuclear medicine was an emerging field, so he entered a two-and a-half year program in radiology imaging at the University of Findlay. After an internship at Toledo Hospital as an imaging technologist, Cheema was offered a job in the department in 2005. He soon began a program at UToledo in health care administration “because I still wanted to pursue a job to move up in the health care industry,” says Cheema. 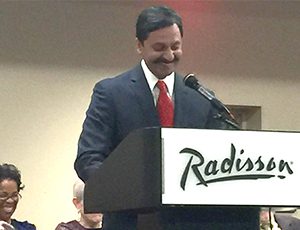 Usman Cheema was the speaker for his Class of 2015 graduates in The University of Toledo Physician Assistant Program.

He finished his degree in 2009 at UToledo, but positions in middle management were scarce because of the 2008 economic crisis. He stayed in his role at Toledo Hospital, where he eventually learned about a new job opening in the stress test laboratory there. While interviewing, he asked the nurse about another person working in the lab. “I asked if he was a physician. He was wearing the long white coat and stethoscope and giving all the orders and running tests. He said, ‘No, he’s not a physician, he’s a P.A.’ I asked, ‘What’s a P.A.?’ He said, ‘Go talk to him.’”

When talking with the physician assistant, who worked in cardiology, Cheema discovered a new direction for his career. “I could see myself doing this work. Being more proactive and helping patients, and in a different field instead of just radiology,” he says. He knew it would require attending school full-time. “I talked to my family, and my wife encouraged me. And my son really encouraged me because he got accepted right out of high school into a BS/MD program in Akron. “He said, ‘Dad, if you really like it and want to progress in the health care field, I think you should go.’”

In 2015, Cheema earned his physician assistant degree from UToledo and began his career. “I really enjoy it because patients aren’t just coming for medication; I get to see them again. I wanted to work in family practice in internal medicine and outpatient care. Patients come back again, and I get to see that they are getting better and their health is improving.”

Cheema provides his patients with health education and advice on how to improve their health through diet and other regimens of care. “I have my own schedule and my own patient population that I see, who are being treated for diabetes to hypertension, arthritis, high cholesterol, gastric problems.”

Cheema says, “I am all about the local community and giving back to the local community. When I was interviewed that’s what my goal was. The P.A. industry is much more lucrative in a bigger city than over here, but I intend to stay here as long as possible and help patients.”