The University of Toledo has extended the contract of Vice President and Director of Athletics Mike O’Brien through April 30, 2022, it was announced today. O’Brien’s current contract had been set to expire in July.

O’Brien stated he will retire from his position at the end of his contract. O’Brien is entering his 20th year as UToledo’s director of athletics. He became the Rockets’ leader in January 2002 after serving in positions at Kansas State, Lamar, Pittsburgh and Ball State.

UToledo is expected to conduct a national search for the next director of athletics. 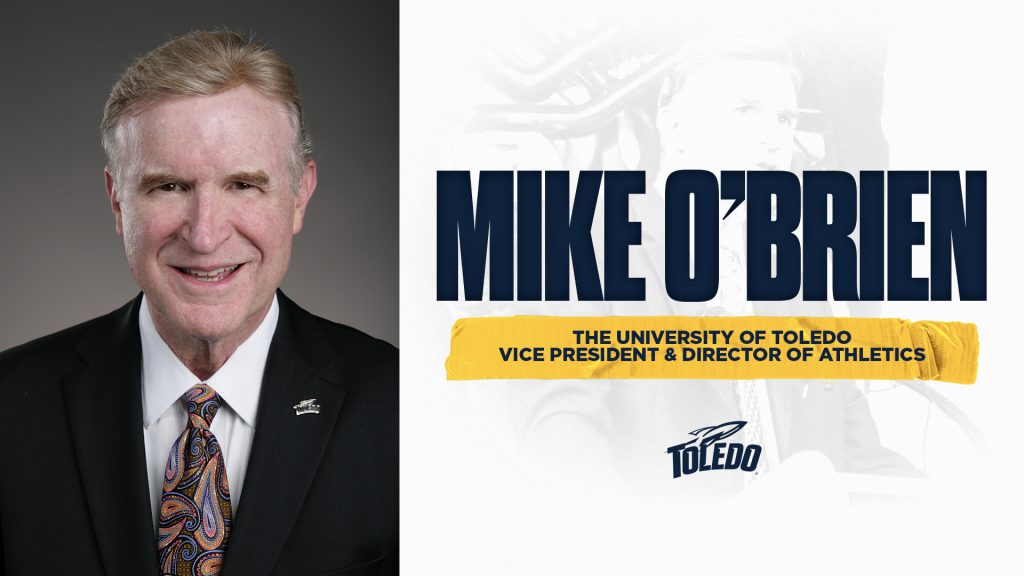 “It has been my privilege to serve as the vice president and athletic director at The University of Toledo for the past two decades,” said O’Brien. “My term on the NCAA Men’s Basketball Committee ends following the 2022 Final Four, so the timing is right to step down and begin a new chapter. I know the hardest part will be leaving behind the student-athletes, coaches, staff, alumni and Rocket fans that make this such a special place. We have been able to develop the right culture for success in academics and athletics. I feel that Rocket Athletics is in a very good place.

“I would like to thank my wife, Michelle, and my son, Jack, for their love and support, and for the sacrifices they have made during my administrative career. I would also like to thank UToledo Interim President Dr. Gregory Postel, and all the current and former staff and coaches for their diligent work and contributions to the program. My family and I have made many close friends in Toledo and we really could not have asked for a better place to call home. I look forward to leading the Rockets over the next 15 months and assisting in the smooth transition to new leadership.”

“I want to thank Mike for his years of service to UToledo. He has contributed to the Rocket community in countless ways over the years,” said Interim President Postel. “This year, his ability to safely navigate the department during the pandemic is an indication of his administrative skill.”

O’Brien, who was named the Football Bowl Subdivision Northeast Region Athletic Director of the Year in 2012, has helped shape the UToledo Athletics program into one of the very best in the Mid-American Conference. His tenure has seen unprecedented athletic and academic achievements of Rocket student-athletes, as well as numerous ambitious capital projects that have elevated Toledo’s status as one of the top mid-major athletic programs in the country. His contributions to the University have extended beyond Athletics as he was chosen to serve as co-director of the Ready to Launch capital campaign in 2019.

O’Brien has also been an instrumental force in initiating some of the most ambitious construction projects in school history. No fewer than six major projects have been completed during O’Brien’s tenure, as well as numerous smaller ones. The major projects include the Charles A. Sullivan Athletic Complex and Savage Arena renovation project (2008); the Fetterman Training Center (2010); renovation of the Larimer Athletic Complex (2014); Savage Arena expansion and renovation (2016); and the construction of a new soccer field, Paul Hotmer Field, on the main campus (2019).In the classroom, Toledo has produced overall department grade-point averages above a 3.3 in each of the past four semesters, including a school-record GPA of 3.527 in spring 2020. Toledo has won the Mid-American Conference Institutional Academic Achievement Award, presented annually to the school with the highest grade point average, in five of the last eight years.

Among O’Brien’s other accomplishments are adding Ohio State, Miami (Fla.), Colorado, Purdue, Arizona, Missouri, Navy, Kentucky, Boise State, BYU, Iowa State, Colorado State and Cincinnati to the home football schedule; securing Savage Arena as a site for the first and second rounds of the NCAA women’s Basketball Championships in 2014; working with the Inverness Club to bring the 2009 NCAA Men’s Golf Championships to Toledo; securing a multi-year deal with Learfield Sports to increase Toledo’s advertising revenue; and joining forces with The Aspire Group to increase ticket sales. In 2017, O’Brien helped negotiate a six-year agreement that made Nike the official athletic footwear, accessory and equipment brand for all 16 of Toledo’s varsity sports.

A native of Iowa City, Iowa, O’Brien earned a bachelor’s degree in elementary education from Missouri Valley College in 1975 and has master’s degrees in education from Wisconsin-River Falls in 1982 and in sports management from Western Illinois in 1986. Prior to his administrative career, O’Brien was an assistant basketball coach at three different schools from 1982-1986.

O’Brien and his wife Michelle have a son Jack, who is a freshman at TCU.