Just before his senior year of high school, Kenneth Singer (A/S ’68) moved with his mother to the Hell’s Kitchen neighborhood of Manhattan. “When I moved in, everyone said, ‘Don’t go to that side of 9th Avenue because that’s where all the African-American people live.’” 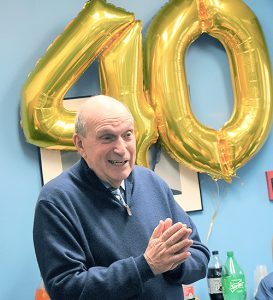 Kenneth Singer celebrates his 40th anniversary at Berkshire County Arc. He has been with the agency that serves developmentally disabled people since 1980 and currently is president and CEO.

The warning did not have the intended effect on Singer. He ventured beyond what he saw as an invisible barrier and befriended some of the black teens he met. With a high school buddy, Singer and his new friends formed the group, Intégrer, the French word for integrate. Together, they traveled to the South to speak about integration at colleges, even at the then-all-white Washington and Lee University in Virginia. “Katherine Dunham, the famous ballerina, sponsored us,” Singer says.

“I was very involved in the Civil Rights Movement,” says Singer, who was a high school senior at the time he traveled to the South. “I did some freedom riding, and I was at the March on Washington and heard Martin Luther King’s I Have a Dream speech.”

Seeking social justice for individuals marginalized by society defines Singer’s life. His beliefs in civil rights for African Americans were the foundation of his advocacy to integrate people with developmental disabilities into society. Beginning in the 1960s, the deinstitutionalization of people with mental illnesses took hold. People with developmental disabilities, many having been housed in mental institutions, also were being removed.

Giving back their lives 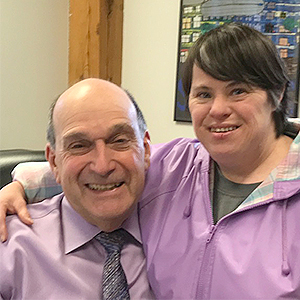 Kenneth Singer poses with a client who receives services at the Berkshire County Arc.

Singer has worked for the Berkshire County Arc for the past 40 years, first as its residential director and currently as president and CEO. The nonprofit agency offers a range of community-based services, including three day programs, 42 residential homes, employment services, citizen and self-advocacy programs, and respite services. The agency serves more than 1,000 individuals with developmental disabilities, brain injuries and autism throughout Berkshire and Hampden counties in Massachusetts.

“As the residential director, I would go into institutions and screen people to get them out of those places,” says Singer. “We wanted to get them into the community where they belonged. They were horrible places. They were told what to wear, what to do, what to eat. They had no control over their lives,” he adds.

Singer and his staff helped to clear out many of those institutions in western Massachusetts to enrich the lives of developmentally disabled people. “The people we serve are just like you and me,” he says. “They may do things a little differently, they may not have every skill, but they have the same feelings. We just want to be able to give people opportunities.”

An East Coast kid in the Midwest

Singer was recruited to enroll at The University of Toledo. He studied sociology and participated in a social work program, in which he had an internship with the Lucas County Juvenile Court.  “That undergraduate social work program changed my life,” says Singer. “That really gave me direction and then ended up being my career.” Following his internship, Singer was hired to stay on as a probation counselor.

“I loved The University of Toledo. I loved the city of Toledo,” says Singer. “That’s why I stayed there. I grew up in New York City, and Toledo was so very different. The people were friendly and warm, and I really liked it there.” Singer did return to the East Coast in 1972. “I went to Connecticut and was then working with kids with disabilities. Then I came here to Massachusetts, and I’ve been in the Berkshires ever since.”

Singer’s parents, Hilde and Kurt Singer, influenced his sensibility to the plight of others, especially with regard to the humane and civil treatment of people. “They taught me about activism, about righteousness and about human rights,” says Singer. In the early 1930s, his parents, who had participated in Germany’s Resistance Movement, fled Berlin to escape the rising terrorism of Hitler’s Nazi regime.

Kurt Singer was born in Vienna, and Hilde (Tradelius) Singer in Berlin. “My father published supposedly the first anti-Nazi newspaper in Europe,” says Singer. He escaped through The Underground to Sweden, and Hilde was imprisoned for a year in an attempt by the Germans to get to his father. “She, too, escaped through The Underground and helped a lot of other people get out.”

His parents lived in Stockholm for five years, where Singer’s sister was born, until they were forced to leave. “The story goes that [Hermann] Göring wanted my father’s head because he wrote a book [‘Göring: Germany’s Most Dangerous Man’] about him,” says Singer. Because the Swedes could no longer protect them, they left for Ellis Island and settled safely in New York City.

“I can remember going to see the movie, ‘Judgment at Nuremberg,’ when I was a kid,” says Singer. “It was a great movie about the war trials, and I went home and said to my mom, ‘You’ve got to go see this movie,’ and she said, ‘No, that’s for the people who didn’t live through it.’”

Kenneth Singer, center, surrounded by his staff of the Berkshire County Arc, celebrates his 40th anniversary at the agency.

Singer, his staff and the group home residents have lived through the COVID-19 outbreak, experiencing one fatality of a resident who had health complications before contracting the virus. “We had nine houses under quarantine at one time, and we had a number of residents and staff who tested positive,” says Singer.

All but the one older man who died have recovered. “It has calmed down now. The staff was incredibly understanding and caring. They’re underpaid and overworked, but they love what they do and they love the people they serve. We made it through this thing so far because we have such dedication,” Singer says.

“We are held together as a family-based organization. It started over 60 years ago because a small group of families wanted something better for their loved ones.” The Berkshire County Arc had the first group home in western Massachusetts. “I found working with people with disabilities became my lifetime passion,” says Singer. “People ask why I am not retired, and that’s because I love what I do. It’s that simple.”

Kenneth Singer, who lives in Pittsfield, Mass. with his wife, Christine, credits her for supporting his career throughout their 30-year marriage.