Dan Saevig (A/S ’84, MBA ’89) has been part of The University of Toledo every day for more than half of his life, first as a student and then as an employee at the institution he loves. That will change soon: The associate vice president of alumni engagement and executive director of the UToledo Alumni Association will retire Monday, March 2.

“I love The University of Toledo; I know its life-changing powers,” says Saevig, a native of Oregon, Ohio. Even before Saevig enrolled as a student at UToledo, the institution had made a memorable impression on him. 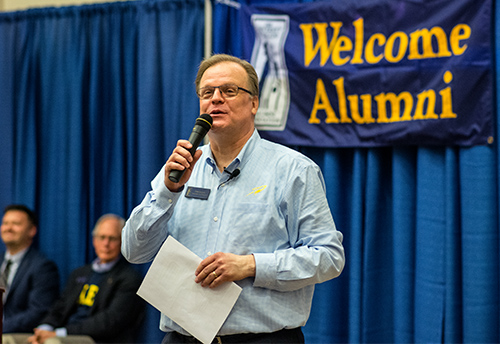 “As a child, I can remember going to programs at the Ritter Planetarium, performances at Doermann Theater, and football and basketball games with my mom (Donna) and dad (Gene),” says Saevig. “Both attended the University,” he adds. “One of the many things that stuck with me is going to the Alumni Association tent at football games for a free hot dog and pop and seeing Ed Schmakel, the alumni director, at the tent, greeting everyone as they arrived.”

“Dan has dedicated his life to The University of Toledo. With his Rocket passion and energy, he has helped grow UToledo’s alumni participation, as well as alumni programs and donations,” President Sharon L. Gaber said. “We thank Dan for his tremendous service to the University for 27 years.”

Under Saevig’s leadership, the Office of Alumni Engagement has:

The UToledo Alumni Association also is financially secure, having increased its reserves by 300% during Saevig’s tenure. 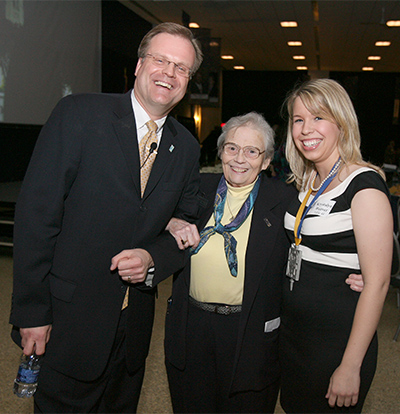 Early in his career, Saevig says the association started the Golden Alumni Society, which is open to anyone who graduated more than 50 years ago from the University or anyone who has reached the age of 75. “At one event, one of our alumnae mentioned that I was young enough to be her son. She paused and then said, ‘No, you’re young enough to be my grandson.’ Now, I’m old enough to be the grandfather,” he says.

“When I started working in the alumni office, we were mostly promoting events in Toledo. Now we truly are a national program,” Saevig says.

The UToledo Alumni Association serves 12 College affiliates, nine special-interest affiliates and nearly 30 chapters across the country. There also are chapters in Malaysia, China and the United Arab Emirates.

Saevig says he is proud of the diversity of the UToledo Alumni Association Board and how the William and Carol Koester Alumni Pavilion was a project that came together in six months in 2012. “The Koester Alumni Pavilion, a gathering spot just west of the Glass Bowl, is a real point of pride for alumni and friends of the University,” Saevig says. It attracts thousands of UToledo alumni during the University’s football season and is a welcoming space where alumni can still get a free hot dog and pop at every pregame party before cheering on their beloved Rockets in a home game.

The Alumni Association also takes its pregame parties on the road for away games. Often alumni, the mascots Rocky and Rocksy, cheerleaders and marching band members bring the Rocket spirit to those events. Saevig has attended countless games and bowl game activities during his tenure, but says his primary memories focus on the people who traveled to the venues. 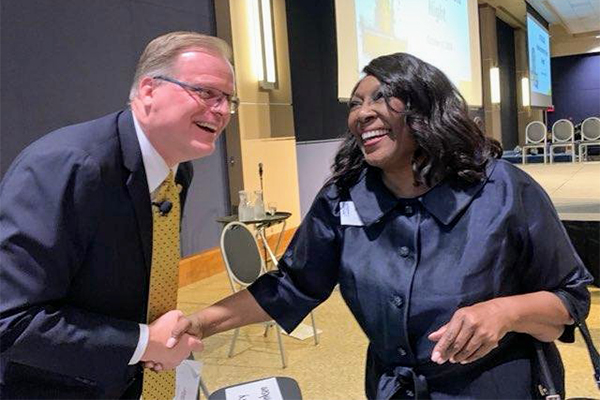 “It’s funny,” says Saevig, “as the maturation process evolves, I remember the people more than the games. You remember that we had more than 2,000 people at our pregame event at the Las Vegas Bowl in 1995 and that it was televised live back to Toledo by WTOL. We can’t forget that the Rockets won the first overtime game in NCAA history, that year, too. Most importantly though, you remember the excitement of alumni from around the country attending games, bowl-related activities, the sense of pride they have in their alma mater and their willingness to share stories of their time at UToledo and the impact the University, its faculty and staff have had on their lives,” he says.

Each year, for the past 18 years, Saevig has put his creative touch on videos he has produced for the Homecoming Gala. They honor the lives of outstanding alumni recognized every year by the University and the colleges.

“People always ask, ‘When are we going to run out of outstanding alumni to recognize at Homecoming?’ It’s one of those nights when one walks away and says, ‘Wow, the University has graduated some amazing people,’ says Saevig. “If anything, more and more of our alumni are worthy of recognition. There’s no better venue than a sold-out Thompson Student Union Auditorium, with people crammed in everywhere, to see the newest award recipients and see what they’ve accomplished as representatives of this great University. It makes you very, very proud.” 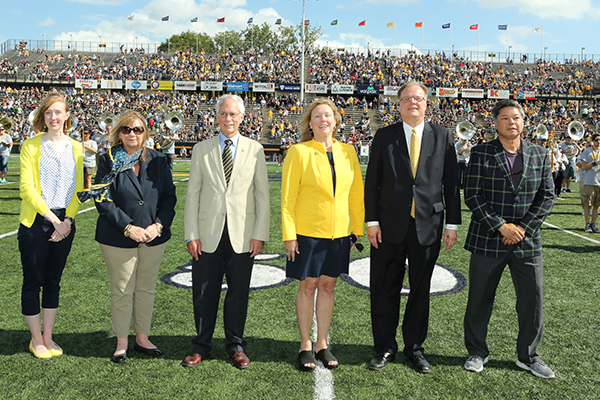 Saevig will leave UToledo and his successor [William] Billy Pierce, senior director of alumni engagement, will step into Saevig’s current role. “I can leave UToledo knowing we have the right person to lead the Office of Alumni Engagement for the next 20 years,” Saevig says. “[William] Billy Pierce is that person. He’s an alumnus, he’s well-liked, he’s personable — alumni will enjoy connecting with him.”

Pierce (Univ Coll ’99, MBA ’09) has been a staff member of the University for nearly two decades, having worked in several leadership roles in the Office of Undergraduate Admission. “I bring a unique perspective in that for most of my career I was responsible for recruiting new Rockets,” he says. “Now, I get to serve at the other end of the spectrum with alumni who have been, like myself, beneficiaries of what I will call the Rocket experience.”

Pierce says he is committed to building on Saevig’s legacy and that of his predecessors dating back to 1921, the year the Alumni Association was established. “I am fortunate to inherit a great team of people who dedicate themselves to the work of this office every day. I look forward to our collective growth and success, with the support of our outstanding Alumni Association Board of Trustees, as we commit to engaging our alumni throughout the world.”