As the co-founder and chief executive officer of Bitwise Industries in Fresno, Calif., Olguin is one of the leading forces in an effort to revive underdog cities by building a robust — and inclusive — technology sector. 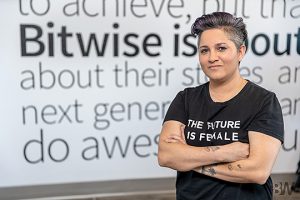 Collectively, the company has redeveloped 250,000 square feet of space in downtown Fresno, created 2,000 jobs, and trained more than 4,000 computer coders.

Bitwise recently secured $27 million in investor funding, allowing it to continue its growth in Fresno and expand to a new market in Bakersfield, Calif.

That kind of success was far from the future Olguin imagined herself having as a teenager growing up in a small town near Fresno in California’s Central Valley.

After scoring exceptionally well on the PSAT, however, scholarship offers began rolling in. One offer in particular stood out for how comprehensive and supportive it was. At 17, Olguin scraped together money for a Greyhound ticket, packed her bags, and left California for the first time to begin classes at The University of Toledo College of Engineering.

“For many, going off to college might be obvious or second nature, but it was certainly not the case for me or my family. How am I going to eat, where am I going to live? The University of Toledo provided a great deal of that in the scholarship package, and it allowed me to whittle down the number of issues I had to worry about.”

Her experience at UToledo changed her life. 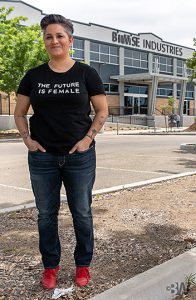 Olguin received a bachelor’s degree in computer science and engineering in 2004 and returned to Fresno, where she soon entrenched herself not only as one of the area’s technology pioneers, but one with a mission.

“The technology industry has a giant need to fill jobs,” she said. “We have to do a better job of making more people capable of filling those roles, and I think the solution is looking in unlikely places.”

Following a short stint in education, Olguin co-founded 59DaysOfCode, a software development competition that, in part, was meant to show off the area’s capability and talent. The competition has since grown into a nonprofit organization promoting and fostering technology development in and around the Fresno area.

In 2013, she co-founded Bitwise Industries.

Bitwise is attempting to build the tech industry from multiple angles. The firm has a coding academy, a business incubator, custom software design services, a real estate development arm, and a service that matches programmers and engineers with local businesses who need tech support.

One of the key parts of Bitwise is the diversity of its coding academy. The company says more than half of its Geekwise Academy students are women or people of color.

“The technology industry as a whole has been grappling for an answer on how to build a diverse and inclusive work force and has completely fallen short,” Olguin said. “All the big names have statements saying this is a problem and we don’t know how to fix it. We think we’re sitting on the solution to that.”

And Olguin believes the true obstacles to getting more women and minorities in tech aren’t desire and aptitude — “you find those aplenty,” she said — it’s small things like a bus ticket, appropriately using email, or finding childcare.

The supportive network Olguin found at UToledo helped her unlock her own potential. Now it’s important for Olguin to help others unlock their potential.

“The University of Toledo is near and dear to my heart and played a huge role in my formative years,” Olguin said. “The College of Engineering was a really welcoming place even though I was very much in the minority in terms of gender and race. I felt very much a part of the school system and believed from day one that people were there to see us succeed.”